If the lock-down of the past ten months has provided me anything, it’s ample time to write.

But words are not always so forthcoming and compliant. Sometimes they rebel. And the mind seems all too eager to conspire.

I recall days spent staring at a blinking cursor on a blank page, overcome by the urge to tip my laptop off my desk onto the floor, where my dreams already lay in so many pieces.

Years ago, I found myself between teaching contracts. I was about to start work on the sequel to my first novel, Eight Pointed Cross, when my husband was offered a job assignment overseas.

Timing and circumstances aligned. We relocated temporarily to Southeast Asia.

I embarked on this adventure with a new laptop, blank notebooks, and plots “already written in my head.”

Twenty-six hours after departing Toronto, we arrived in Singapore, a tropical paradise spilling with orchids and palm trees and seemingly endless inspiration.

It struck almost immediately: a debilitating bout of writer’s block.

People sometimes assume that because I write historical fiction, I have some kind of immunity against writer’s block.

Indeed, history supplies the framework, but I weave the plot—connecting my fictional characters to the actual history.

Had the decade of researching, writing, and revising Eight Pointed Cross hollowed me out?

Had my characters anything left to say?

Worse, did I even care?

Sleep became a distant memory. I developed a talent for avoidance and procrastination. I behaved like a petulant child, snippy and grumpy—an absolute peach to live with, no doubt.

Despite the opportunity to write uninterrupted, a veritable gift to an author, I couldn’t jot down a single sentence.

The words refused to reveal themselves.

I recall my first day in Singapore with vivid, agonizing clarity.

The sun had just risen, colouring the hazy sky. I sat at my ultra-modern glass desk, situated before a wall-to-ceiling window that offered an encompassing view of the cityscape. I stretched my arms overhead in preparation for a marathon writing session, opened a new document in Word, got set to strike the keys—

I inhaled. Shook off the initial flutter of panic.

I went to the gym and hit the treadmill, the elliptical, the weights—that should get the ideas churning.

Came back to the apartment. Wrote a couple words. Deleted them. Stared at the screen. Nothing. Just that annoying, blinking cursor.

Okay, no big deal. I forgave myself the first day’s lack of productivity. After all, I’d just arrived in a new country, a new continent, the farthest from home I’d ever been. Maybe the drastic temperature swing from -25°C in Canada to 40°C in Singapore was to blame. Or the 13-hour time difference. The stiff, uncomfortable bed. The possibility a snake might come up through our toilet—a note on the bathroom door warned to keep the seat down because of that possibility.

My days ran together in a seamless blur of frustration, blankness, and self-doubt. And irksome, blinking cursors.

Distractions beckoned—and met with no opposition. My suitcase still needs unpacking. I should probably organize the towels. Maybe refold the laundry? I really ought to dust and vacuum. (We were staying at a serviced apartment).

When made-up chores ran out and cabin-fever set in, I wandered Orchard Road to my favourite outdoor café, My Art Space, where I’d read novels by authors who actually managed to finish their books. 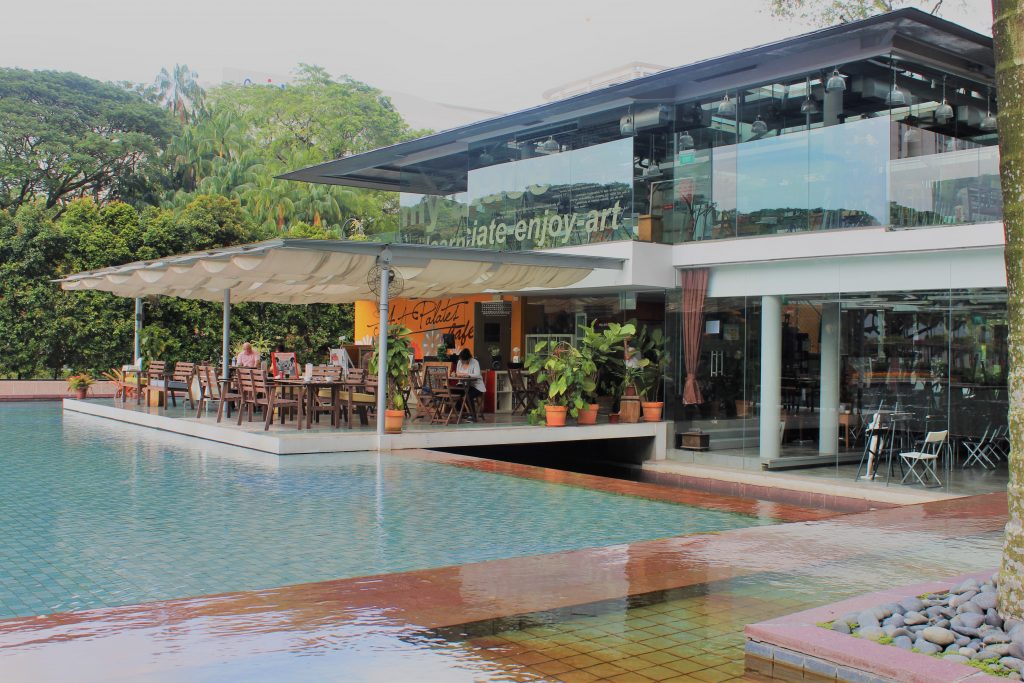 Nothing apart from a tether could keep me seated at my desk.

I opted to do anything but try to write because anything was better than staring at the white nothingness on my screen.

One evening at a Starbucks patio, I had a mini-meltdown over iced Hojicha tea. My engineer husband carefully suggested I “pick a scene or character and just write something.”

Just write something. Well damn, why didn’t I think of that?

Of course he meant well. And, he was right.

My first draft need not be perfect. Rough copies never are. Neither are good copies.

Besides, perfectionism is the enemy of creativity. The drive to compose something flawless in my mind stopped me from touching my keyboard.

And waiting for that elusive “inspiration” to strike? A sure-fire way to guarantee it won’t.

One overcomes writer’s block by writing.

So, begrudgingly, I took Brad’s advice.

I concentrated on one character and tried to write his story. The process focused my attention, even though the prose was stilted and the dialogue wooden. It read more like an essay, devoid of emotion. I upbraided myself up for it, for squandering such a wonderful opportunity by throwing away this gift of time.

In hindsight, the pressure I put on myself to write deftly-crafted scenes made it so I couldn’t write any scenes.

I needed that damn pill from Limitless.

I Googled if NZT-48 existed and where I could buy it. (It doesn’t).

“Fear doesn’t go away. The warrior and the artist live by the same code of necessity, which dictates that the battle must be fought anew every day.”
― Steven Pressfield, The War of Art

Then, one afternoon as I sat at My Art Space with my hopelessly blank notebook and a pot of lavender-bergamot tea, a delectable scent drifted on the breeze from nearby frangipani trees.

The sweet, floral fragrance awoke something within and a beautiful image blossomed in my mind.

The image inspired lines of dialogue. Which inspired an entire subplot.

And just like that, a deluge of words rushed forth.

I will never forget that wondrous scent that somehow lifted the fog.

I scrawled a note to myself so I would always remember that precise moment, that precise smell. And to serve as a reminder that blocks are temporary things.

They can be smashed to bits or gently nudged aside.

In thanks, I planted and adopted a frangipani tree in Langkawi, Malaysia at the Frangipani, an aptly named Eco-resort on the shores of the Andaman Sea.

From that day on, I felt lighter. Hopeful. Motivated.

I no longer looked for excuses to justify my procrastination or for shitty movies on HBO to occupy my time.

I scribbled constantly and happily in my notebook, which I carried with me everywhere.

That’s not to say I have not had moments of writer’s block since. But I have learned what works for me when facing down that cold, callous blank screen.

Here are ways I chisel that block.

I lose myself in nature. Surround myself with quiet, living things—plants and flowers and trees. Listen to them breathe.

Get to the ocean or lake or river as much as possible. Listen to the water chortle. 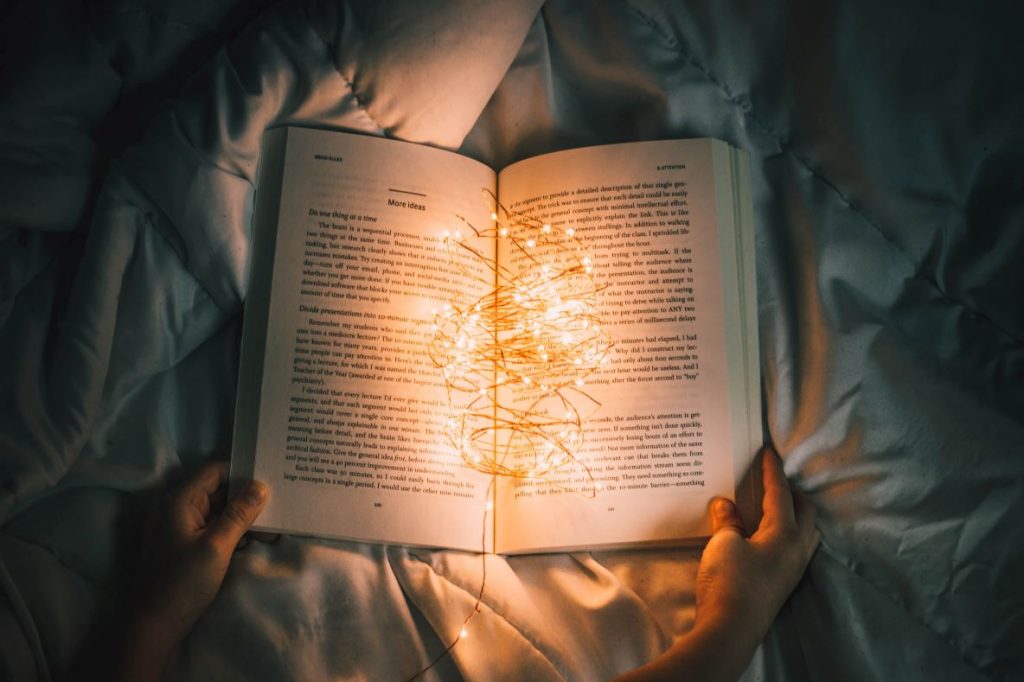 Edit existing scenes to reawaken the thing inside me that needs to tell the story. Revision engages the literary muscles and gives rise to new ideas.

Tackling a blank page is intimidating. The same feeling of uncertainty assails me every time I begin a new chapter.

The moment something is down on the page, however, I love to edit the hell out of it—to play with the words, add detail, add humour, shape and carve and hack. The process immerses me in the scene, reconnects me to the story and the characters, and almost always results in the creation of something new.

Actual exercise is just as helpful. Momentum pushes me out of the doldrums.

Physical exertion gives me perspective and opens up my mind to so many creative possibilities. In fact, many of the ideas for this blog post came during my 100-burpee workout (with the idea to even mention that coming at burpee number 31).

Sometimes when I’m paddle boarding in a cove, a scene may unfold in my mind. Hiking also provides great opportunity to work out the details of a setting as I take notice of the sensory details around me—the way the light falls, the way the wind rustles tree branches, the smell of the air just after the rain, the sensation of salt dancing on my hand, the taste of heavy mist. That will crush writer’s block underfoot.

Before Covid-19 grounded us, Brad and I spent five weeks in New Zealand, and if there was a peak that could be summited, we went for it. Pushing past my edge is invigorating and very rewarding from a creative perspective—whether it’s a tough race, a 20km hike over volcanic alpine terrain, catching a wave, or snowboarding an advanced run, the ideas flow because the emotion and exertion these activities elicit can be applied to any scene. 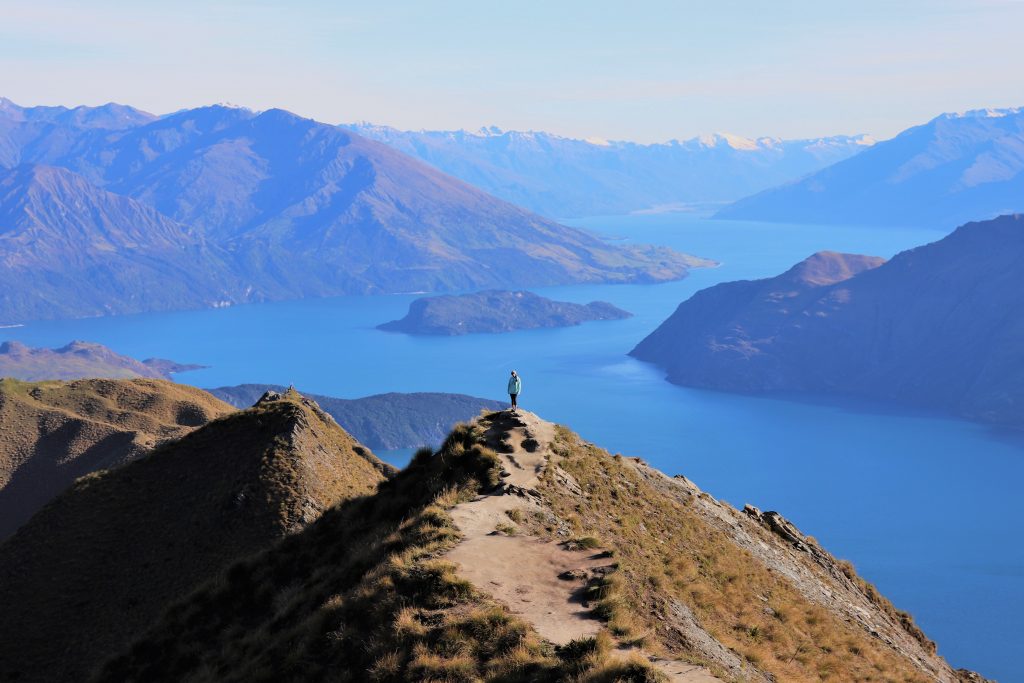 Going for a run also helps me break through these blocks. Some of my favourite scenes have developed during a jog. The key is not forgetting my ideas before I make it home—inspiration to run faster.

I howl with my husky.

I study my husband’s face. Not in a creepy way. Well, maybe a little.

I go a few rounds on the punching bag.

Figuring out the time of day that serves best for creative endeavours has also proven beneficial. For me, writing new scenes comes easier in the early morning, while I find the afternoon or late evening optimal for editing.

Another useful device to tackle writer’s block is music.

The right soundtrack helps me pace battle scenes and take the quieter scenes slow and delicately. As I wrote Falcon’s Shadow, my workspace swirled with evocative arrangements from Game of Thrones, Inception, Braveheart, the Grey, and the instrumental soundtrack to one of my favourite films ever, Point Break.

Most of all, music can promote divergent thinking, a keystone of creativity.

Once the imagination is sparked, ideas bloom.

And words get written.

My advice then, is this:

Talk to a friend.

If you can, try yoga.

Walk barefoot in the grass.

Take in the sun as it sets or as it rises or both.

Lie on your back with your legs up against a wall.

Get bored—creativity will rush in to fill that space.

Revisit passages from your favourite novels.

Read quotes that move you. (I am partial to pretty much anything Winnie the Pooh says.)

Be gentle with yourself.

Listen to music. Create your own soundtrack.

The more fear we feel about a specific enterprise, the more certain we can be that that enterprise is important to us and to the growth of our soul. If it meant nothing to us, there’d be no Resistance.”
― Steven Pressfield

Fight through the resistance.

And know you can create your art space anywhere.