The Art of Collaboration (and Rhinos)

Extraordinary things are borne of collaboration.

The truth of this reveals itself to me daily in my work as both an author and an educator.

Often, teaching can make a person feel like an island—toiling in isolation behind a closed door, especially now, in a time of separate cohorts and quadrants, mask-wearing and physical distancing.

But teachers are island-chains, archipelagos, and we are all connected, even if beneath the surface.

The same holds for writers.

During a recent browsing session, I came across an excellent article, On Making a Living as a Writer, which underscores the importance of cultivating meaningful relationships with fellow authors.

My previous attempts to do so met with varying degrees of success.

Many years ago, I went to a fancy book launch at a fancy hotel attended by fancy people who wore fancy scarves.

I didn’t think I’d ever fit into literary circles.

Soon after, however, I joined an online writing group, founded by Canadian author Marsha Skrypuch. Members review each other’s works-in-progress, and the feedback is often the calibre for which serious writers would pay.

Yet beyond the helpful critiques, I found caring, talented individuals, who became good friends.

And although I edit professionally as a side-gig, these are people whose work I’ll proofread for free in exchange for their assessment of my own stuff. I’ll also readily promote their books and successes, and in turn, they show me the same love.

One such person is Anitha Robinson. Over the past five years, she and I have spent countless hours critiquing each other’s work and cheering on each other’s accomplishments.

The Art of Collaboration: Saving the Rhinos

This past October, Anitha announced the launch of her children’s book, a Family for Faru, which highlights conservation efforts in Africa.

Tetenya and his mother have found Faru, a baby rhinoceros, alone on the savannah. They know that rhino sanctuaries will adopt orphaned infants, but finding the rangers who protect local herds may be a long and risky prospect—poachers are lurking about the landscape.

Anitha drew inspiration from time spent on the savannah and from conservationists’ efforts to deter poachers by injecting pink dye into rhinoceros horns. The dye causes the horn, made up of keratin—the protein that makes up our fingernails—to lose its value on the black market.

The chemical, perfectly safe for rhinos, is toxic to humans.

Having read early drafts of Faru, I was elated that others would experience this delightful, informative story. I sent Anitha a congratulatory message and promised to buy a copy to read to my special needs students. I loved the idea of introducing them to conservation and developing an art project based on Faru and his pink horn.

Anitha immediately replied with excitement and a suggestion. She proposed auctioning the students’ artwork and donating proceeds to the rhino charity, Care for Wild.

The project inspired teamwork not only between two authors who write vastly different genres but also among my colleagues across all academic departments.

The school’s administrative team instantly greenlit the initiative and supported it from inception to end. My department head approved all the budget I needed to buy various-sized canvases for both my class and a second special needs class.

The science teacher invited me into his lab to use his high-tech projector so I could trace rhinos on the canvases.

The art teacher made templates for me. Two of her incredibly talented students volunteered to paint exemplars.

The energy was kinetic—and sorely needed. School amid a pandemic is rather devoid of mirth, despite everyone’s best efforts.

Pre Covid, I’d have invited Anitha to drop in and meet my DD/ME students, read a Family for Faru aloud, and share her experiences in the savannah. Of course, the pandemic made in-person visits an impossibility. However, Anitha was kind enough to record a live reading of her book. Her delivery was lively and dynamic, complete with sound effects—perfect for my students, who remained engaged from the first page to the last.

The Artists at Work

Our DD/ME students are exceptional in every sense of the word. They tackled this project with enthusiasm and fascination. Several requested a second canvas. Some even painted three. And some were very particular about the precise shade of pink or blue I needed to blend.

As always, the Education Assistants were beyond helpful. They assisted wherever needed, pouring and mixing paint, offering hand-over-hand to those who struggle with fine motor skills, and encouraging those who could work independently. Oh—and laying newspaper on the desks because I always forgot. (Shhh—don’t tell my department head!)

We worked diligently on the canvases for two weeks.

Each painting is as remarkable and colourful and beautiful as the artist who produced it, and a testament to the power of collaboration.

Once the paintings were auction-ready, I emailed my colleagues photos of the finished pieces and started accepting bids. Potential buyers would have four days to try winning their favourite canvas.

Bidding wars ensued. One buyer swooped in mere seconds before the auction closed and outbid his competition.

We sold every canvas and raised just shy of $500 for the rhino orphanage.

Thanks to the collective effort and generosity of students and staff, Monsignor Johnson’s DD/ME students became the proud adoptive parents of an endangered baby rhino.

And learning their paintings stirred heated competition resulted in some pretty wide smiles. 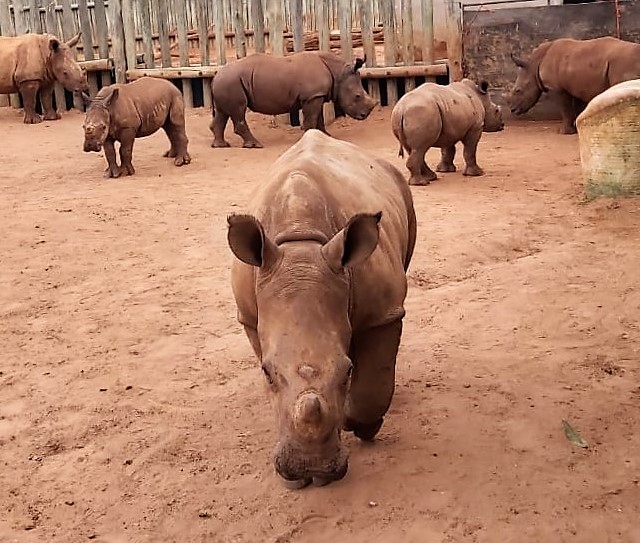 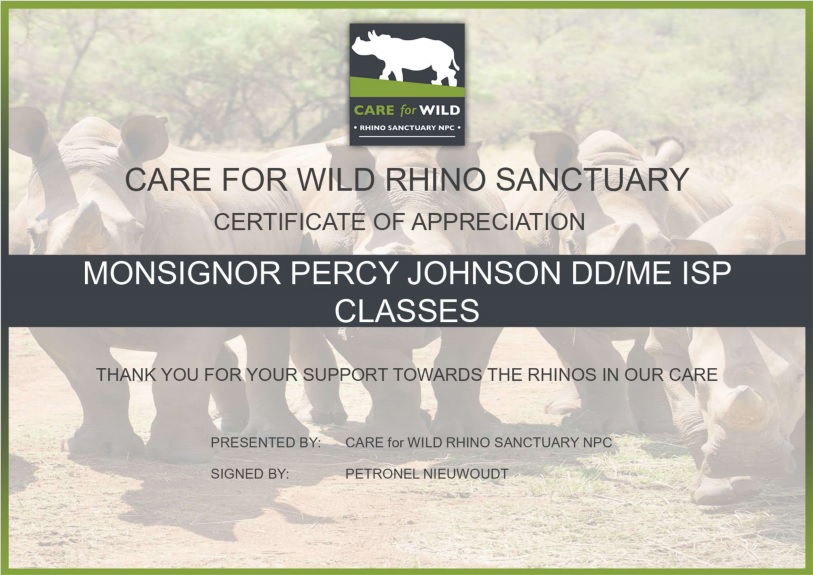 You can check out Anitha’s blog post about our project here.