A Book Launch at the Maltese-Canadian Museum

When an actual Knight of the Order of St John offers to host the launch of your novel at the Museum he curates, you respond with a resounding, “OMG-OMG-OMG-OMG!”

Of course, a simple “Yes, that would be lovely, thank you” works just as well.

And so, on a blustery afternoon in December, the Maltese-Canadian Museum held the launch of Ash Fall, the third novel in my Siege of Malta trilogy. 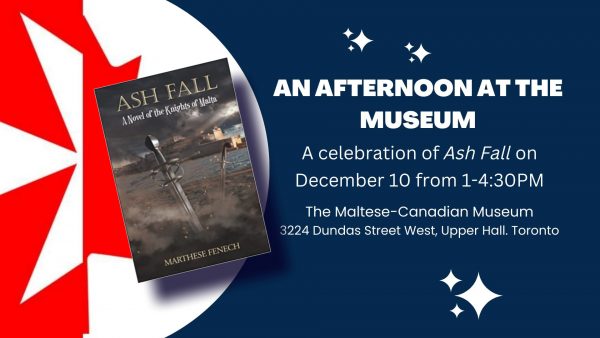 Yet this event was so much more than a celebration of my work.

Given the health issues that kept me housebound for much of 2021, as well as ongoing Covid-related shutdowns that made in-person gatherings impossible, any opportunity to come together under such happy circumstances is a gift.

The Most Personal is the Most Creative — Martin Scorsese

I am not one for big, lavish productions. Give me warmth, a lack of formality, and a down-to-earth vibe any day – like I’m hanging out with buds somewhere totally inviting and unpretentious.

And so, I could not have imagined a more perfect, authentic place to celebrate a historical trilogy than the Maltese-Canadian Museum. A hidden gem nestled in the heart of the Junction in Toronto, it boasts incredible artifacts, models, coins, books, and photographs. Admission is free. And a wonderful group of dedicated volunteers works hard to maintain the exhibits.

The day before the event, my husband and I set up the already beautiful space with freestanding banners and boards emblazoned with each of my novel’s covers. I designed bookmarks to give to attendees and placed them throughout the Museum. I also brought a framed photo of my darling husky, the inspiration behind Louie, the leader of Fr Anton Tabone’s pack in Falcon’s Shadow.

My friend and fellow author, Franco Davies, sent me a wonderful photograph of Ash Fall positioned in front of the actual Fort St. Angelo, which I had enlarged and framed — the image not the fortress.

Even the pen I’d use to sign novels carried significance; I received it at the hospital in Munich, Germany on the day of my surgery — a procedure without which I would not have made it to my own book launch.

I Just Give Myself Permission to Suck — John Green

As fellow writers and other artists can attest, the lead-up to such events is often wrought with nervous anticipation.

In the days before my first book signing in Malta for Eight Pointed Cross ten years earlier, waves of nausea rolled and crested. Even preparing for the Facebook Live Virtual Launch of Falcon’s Shadow had my gut in knots.

Book launches are not always well-attended.

Of her first experience holding one, legendary Canadian Author Margaret Atwood tweeted, “I did a signing to which nobody came, except a guy who wanted to buy some Scotch tape and thought I was the help.”

Neil Gaiman recounted the time he and Terry Pratchett had a signing in Manhattan for Good Omens, saying, “We were meant to have been there for two hours. After an hour of nobody in the store, we told the store manager that we were going back to our hotel and that we would be in the bar, and if anyone came to get a book signed to send them there to us. Nobody came.”

Nobody Came cycled through my mind over and again.

And so, despite doing a ton of pre-event promotion across print and social media, I braced myself for two likely scenarios: I’d either face an empty room or the Ancient Booer from the Princess Bride who screeched insults in Princess Buttercup’s terrified face (better than an empty room).

If even ten people (Ancient Booers or otherwise) showed up, I’d have called it a triumph.

Unexpected Intrusions of Beauty; this is What Life is — Saul Bellow

…Well, not only did I survive the launch without being branded the Queen of Slime, but over 200 people came out— some traveling a great distance to be there, others juggling multiple commitments.

And we sold every copy of all three novels. And there were pastizzi.

A more successful book launch than I could have ever imagined.

Admittedly, I feel kind of guilty, like I bypassed an author’s gruelling rite of passage.

The outpouring of support from the Maltese community, family, friends, teachers, and readers of my work—now new friends—completely bowled me over.

I had the privilege of engaging with every person in attendance,  including Denise Demicoli, the gregarious Consulate General of Malta in Toronto, Valerie Buhagiar, the exceptionally talented director of the highly acclaimed feature film Carmen, and Antanas Sileika, a renowned Canadian novelist and critic.

Each person left an indelible impression with their presence and wonderfully warm words.

What a joy to thank the people in front of me for being there, reading my books, telling their friends about them, getting mad at me for killing off characters they like…

And most of all, my attempts at humour landed—I have actual video evidence to prove it!

Gratitude is the wine for the soul. Go on. Get drunk — Rumi

I cannot thank the Museum members enough for organizing and executing the event, especially Richard Cumbo, the aforementioned Knight of St John and Museum curator, who spearheaded the event and promotes my novels at every opportunity.

The success of the day owes entirely to the team members and their sweet, joyful enthusiasm. They greeted attendees so graciously, provided tours of the Museum, and served up the best Maltese treats.  Lovely attendee and writer Karen Schwartz shared her experience on the popular e-zine, Medium. Click here for her article.

Very special thanks to my husband, Brad, who tirelessly handled all book sales and photographs and the carrying of heavy boxes. Perhaps he was merely auditioning for his role as Oar Slave #7 in the television series adaptation.

Receiving a nod from the Maltese-Canadian Community means more to me than I can convey. I could not be prouder to share this ancestry, this rich and valiant heritage, and this strong-willed, feisty spirit with them—and with you.

There are no bad pictures; that’s just how my face looks sometimes – Abraham Lincoln