Wait… You Want my Autograph? My First Book Signing

From the moment I scribbled my first story in a school-issued notebook, I dreamed about the day I’d become a published author and get to host a book signing.

Part of that dream came true in 2011 when BDL Books published my novel, Eight Pointed Cross.

But because BDL is based in Malta and I live in Canada, I assumed I’d have to settle for virtual interactions with readers. For some reason, the idea of holding an event locally never occurred to me. Chalk that up to my being a newbie author without a clue.

And so, I engaged with readers online. From the outset, it proved hugely rewarding. 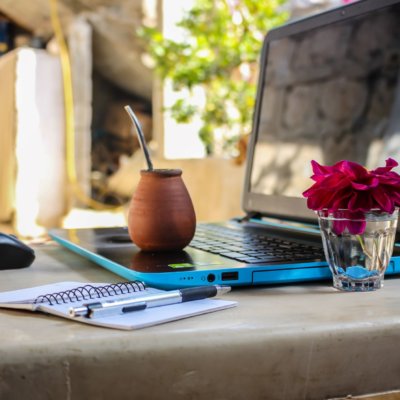 Receiving an email from someone who has read my novel is a light-scattering sunrise, no matter the time of day.

Not only am I grateful beyond measure that by reading my work, a person has given me the most precious gifts a person can give—their time and attention—but to then make the effort to reach out… well, that’s something really special.

Even if it’s to drop a line to tell me they’re pissed I killed off a character they love.

Few things are as gratifying as hearing from someone who found escape in my book or took inspiration from it or cared enough about a character to begrudge me their demise.

One of the first emails I received came from a young woman who shared with me the challenges she faces as a naval cadet and how connected she feels to Katrina, a strong, gritty, female protagonist learning archery at a time such a thing utterly defied social conventions.

Soon thereafter, a Maltese history student wrote—with the thoroughness of an academic thesis—how much it meant to him that Eight Pointed Cross culminates with the lesser-known Siege of 1551, rather than the more popular Great Siege of 1565. He expressed his excitement at the prospect of the saga continuing with a second and possibly third book.

These are two examples of the many touching letters readers have sent over the years. I revisit them whenever I need a reminder of why I love to write—and for whom I’m writing.

Also, no email goes unanswered; I enjoy replying to messages as much as receiving them. (Here’s my letter to an aspiring writer).

Now, if only I could meet some of these wonderful individuals and thank them in person…

You can’t stay in your corner of the forest waiting for others to come to you. You have to go to them sometimes–Piglet

So that’s what I did.

The summer following the release of Eight Pointed Cross, my husband and I travelled to Malta, my first time in five years and his first ever.

Upon arrival, I met with BDL’s director and general manager to discuss promotional efforts for Eight Pointed Cross. They immediately arranged a book signing at a shop centrally located in Malta’s magnificent capital city, Valletta. 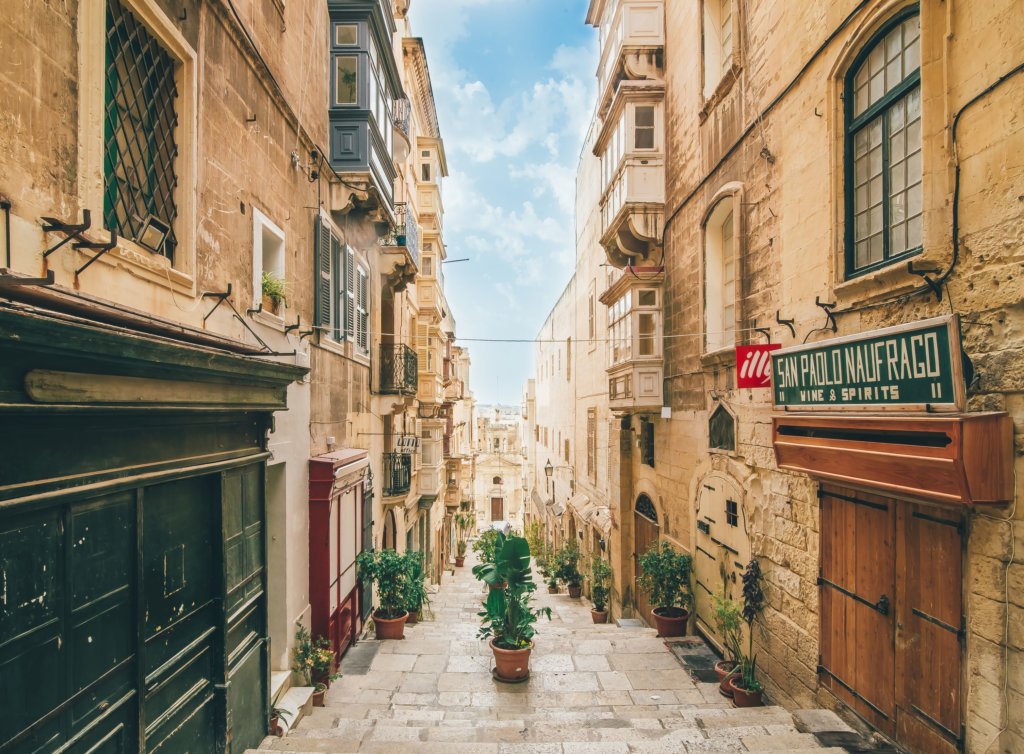 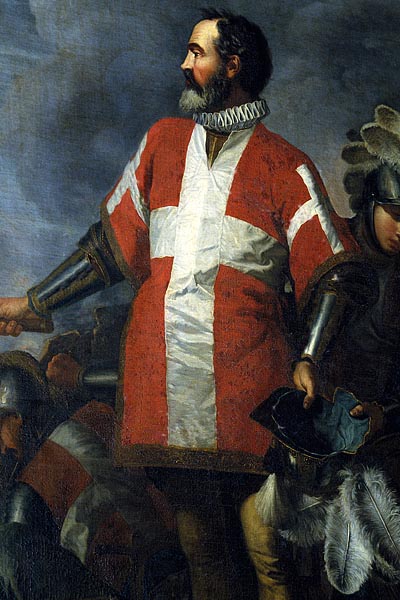 What an honour for me to have my first official author event take place in the city named after the Order of the Knights of St John’s most renowned Grand Master, Jean Parisot de Valette. This remarkable man played a pivotal role in history, engineering Malta’s defensive strategies during the Great Siege of 1565. On 28 March 1566, he laid the city’s foundation stone. He is also a prominent character in my novels. His tomb is housed in the crypt of St John’s Co-Cathedral, one of many gems in Valletta’s crown.

And as if the location wasn’t already meaningful enough, the inspiration to write this trilogy blossomed during a visit to that very city a decade earlier.

My excitement bubbled over.

I had imagined my first book signing since I was a kid spinning yarns about talking rabbits.

A note my sixth-grade teacher attached to one such story further cultivated this daydream:

“Great imagination and creativity. I can’t wait to be standing in line for an autograph on your latest bestseller.”

Although Mrs Brewer could not attend my book signing in Malta, I carried her encouraging words with me always.

Finally, but foremost, I’d had such positive experiences engaging with readers online—getting to meet them in person promised to be next-level awesome.

The day following the book signing announcement, my nerves unravelled.

Other than my wedding and the odd birthday party, I’d never been the reason for an event.

Despite all my colourful imaginings, I had no idea what was expected of me—how many pens do I bring? What about a tablecloth? Should I practice my signature? Is it tacky if I wear flip-flops? Do I make opening remarks? Should I read excerpts from my novel aloud?

What’s more, authors are so sophisticated and charming and articulate. What if I come off as a bumbling, awkward idiot?  Or I try to be funny and no one laughs? Will people be disappointed when they meet me?

Will people even come?

Oh my gosh, what if no one comes?

My gut twisted itself up in knots. Sure, the Malta Independent publicized the details of the book signing, but still.

The drive from Birżebbuġa to Valletta that morning was a seamless blur of flat-roofed limestone dwellings and sun-parched fields. I barely remember the nervous walk-jog from the car through the cobblestone lanes of the historical city to the bookstore, apart from my calm, collected husband at my side assuring me with each step that everything would be great.

An entreaty cycled over in my mind: Come on, Grand Master Valette, help me channel my bad-ass inner warrior.

But when I stepped inside the little shop, a snug space that felt like a warm, literary hug, my tension melted.

The shopkeeper had set up a banner and arranged a display of my books stacked atop a table (complete with a tablecloth) where I would spend the next two hours meeting people and signing books (hopefully).

As I waited for the event to commence, dozens of scenarios played out in my head and the gut started churning again. I can’t pinpoint precisely what I expected to happen. Something between fan-demonium (my dream) and a post-apocalyptic void (my nightmare).

And lovely Luiza Tanti swept inside with a big smile, a dog-eared copy of my book, and sparkling, uncorked energy.

Her bright, irresistible enthusiasm flooded the shop like sunshine. Meeting her was a highlight of the event. I signed her book with a message of deep gratitude. We took photos, shared laughs, and spent time chatting. 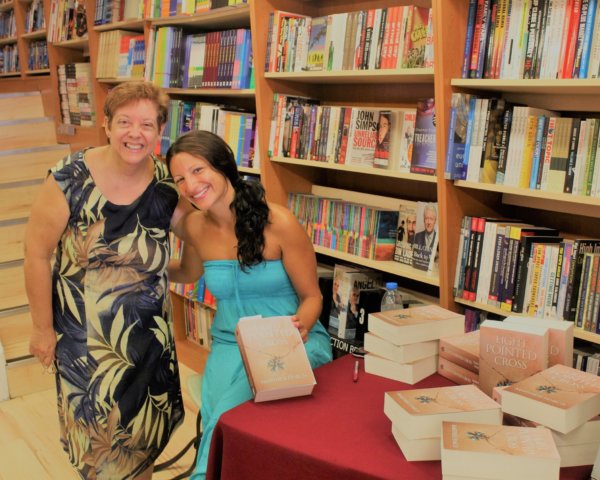 Luiza ushered in a steady stream of people, all eager to meet me—me! I’m still struck that so many individuals took the time to venture to the city so I could sign their books. If you know the chore it is to get to Valletta by car or bus, you know their attendance was no small gesture.

It’s impossible for me to effectively convey what a privilege it was to meet everyone who turned out. What a pleasure to discuss their favourite characters and those they despised. To hear which scenes resonated most and which made them laugh.

But best of all, to have the chance to thank each of them personally for buying and reading my book. 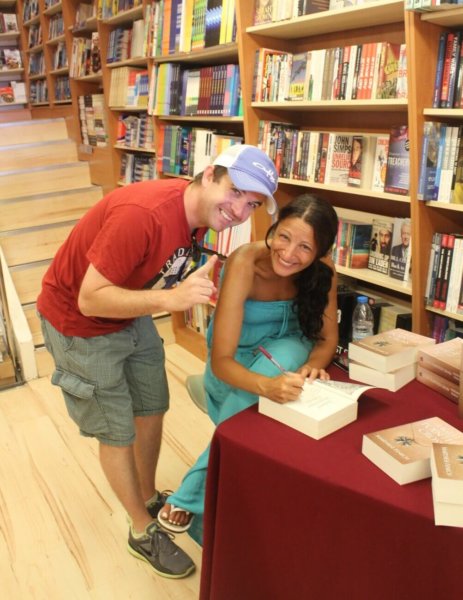 Local Maltese made up the majority of those who came that day, making a very memorable experience all the more significant. Their presence meant I had gained the approval of the people on whom my novels are based. It meant Eight Pointed Cross had captured the spirit of the Maltese.

And that affirmation was a landmark moment of my life.

As the event concluded, a camera crew and reporter stopped in for a brief chat. We talked about what inspired me to write the story and what I love most about Malta. The interview aired that same evening.

The next day, I went to a local bank to open an account. The clerk asked me to produce my passport as identification. Although I’m not in the habit of carrying it with me, fortunately, our flat was close enough that I could dash back to grab it.

As I stood, the clerk peered over her glasses.

“Yes, that’s me,” I replied, breaking into a stupid smile because a stranger recognized me.

“Ah, then don’t worry about your passport,” she said. “I know who you are.”

A special thanks to my husband, Brad, for capturing the images of my first book signing and for his perpetually calming presence.